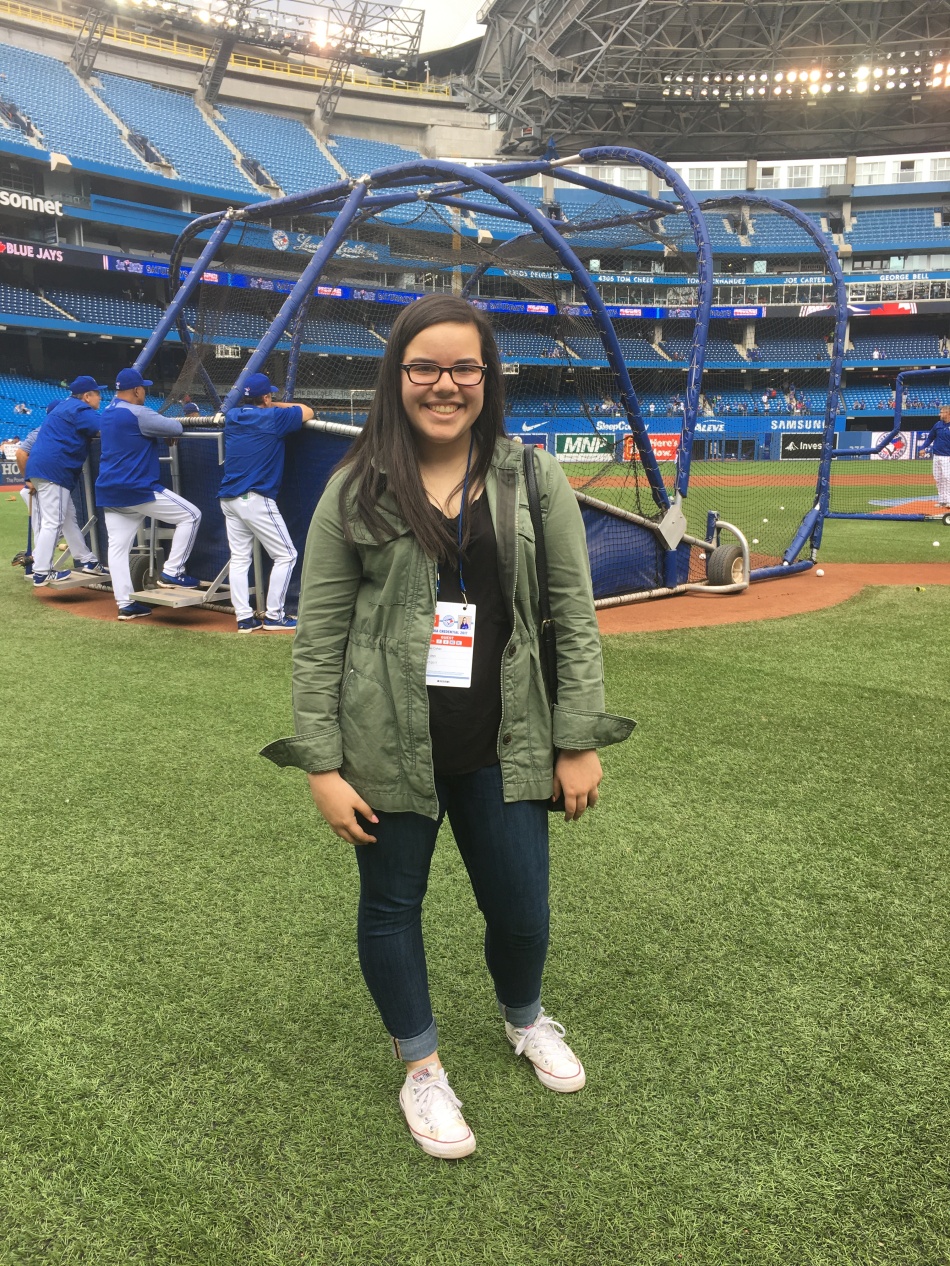 This years’ birthday game was much different than last years.

Thanks to the @BlueJays for sending me my annual birthday gift! I love and appreciate it! #BlueJays #LetsRise pic.twitter.com/q7ndQsz2Lk

It all started with the tweet above. My mom was in contact with someone from the Toronto Blue Jays ticketing and events division, and decided to talk to the man she was on the phone with about my twitter and blog, and potentially doing something special for my birthday. He ended up giving her the contact to Blue Jays Manager of Digital Marketing, April Whitzman. April and my Mother corresponded via email, and arranged for myself to arrive at the Rogers Centre at 9:45am to shadow April with all of her pre-game work. Needless to say, I was incredibly excited for this opportunity… it was just an added bonus that this was happening on my birthday!

Once I had met April and gotten my press pass, we headed upstairs to the media/press box. It is located directly in the center of the Rogers Centre, and sits all of the media and journalists that cover the Toronto Blue Jays. The box was huge, and must sit over 50 people. Above the rows of chairs and up the stairs, there is a food/drink bar with a lot of tables for all media to talk about the game, as well as eat a delicious meal prepared by Blue Jays chefs. Everyone was so friendly inside. Directly beside the rows of chairs, there are the broadcasts booths. One with Joe Siddal and Jerry Howarth, the other with Buck Martinez and Pat Tabler. It was so cool to be able to see there view and their vantage point of every game they call. To the left of the broadcast booths, there is a massive room that houses all of the video and different angles from each camera. The people inside are the ones that help make the Blue Jays game broadcasted on TV so smoothly!

Myself, April, and a Blue Jays photographer headed to the field as the grounds crew were hard at work preparing the field for batting practice and the game ahead! It felt so magical stepping onto the field, knowing that every player steps on this same surface for every single Blue Jays home game.

As we headed the the dugout, I noticed all of the batting helmets for each player on the bench. If you flip the picture upside down, you will see numbers of some of our favourite players, including Russel Martin; Devon Travis; and Josh Donaldson! 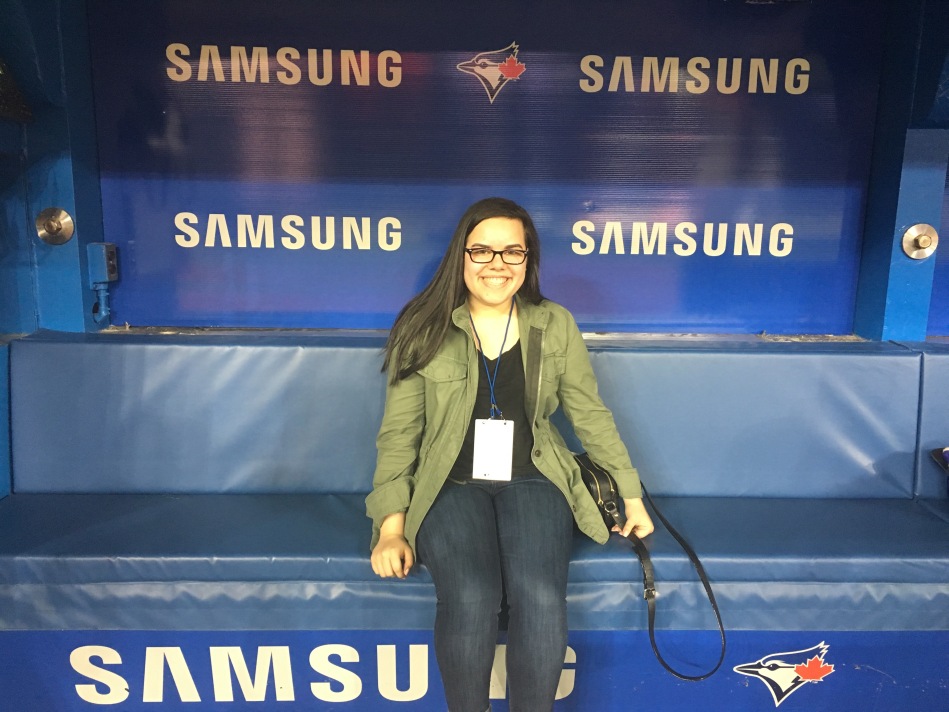 Of course, I had to sit on the dugout benches! The first two pictures were taken by April, the third and fourth were taken by the photographer. 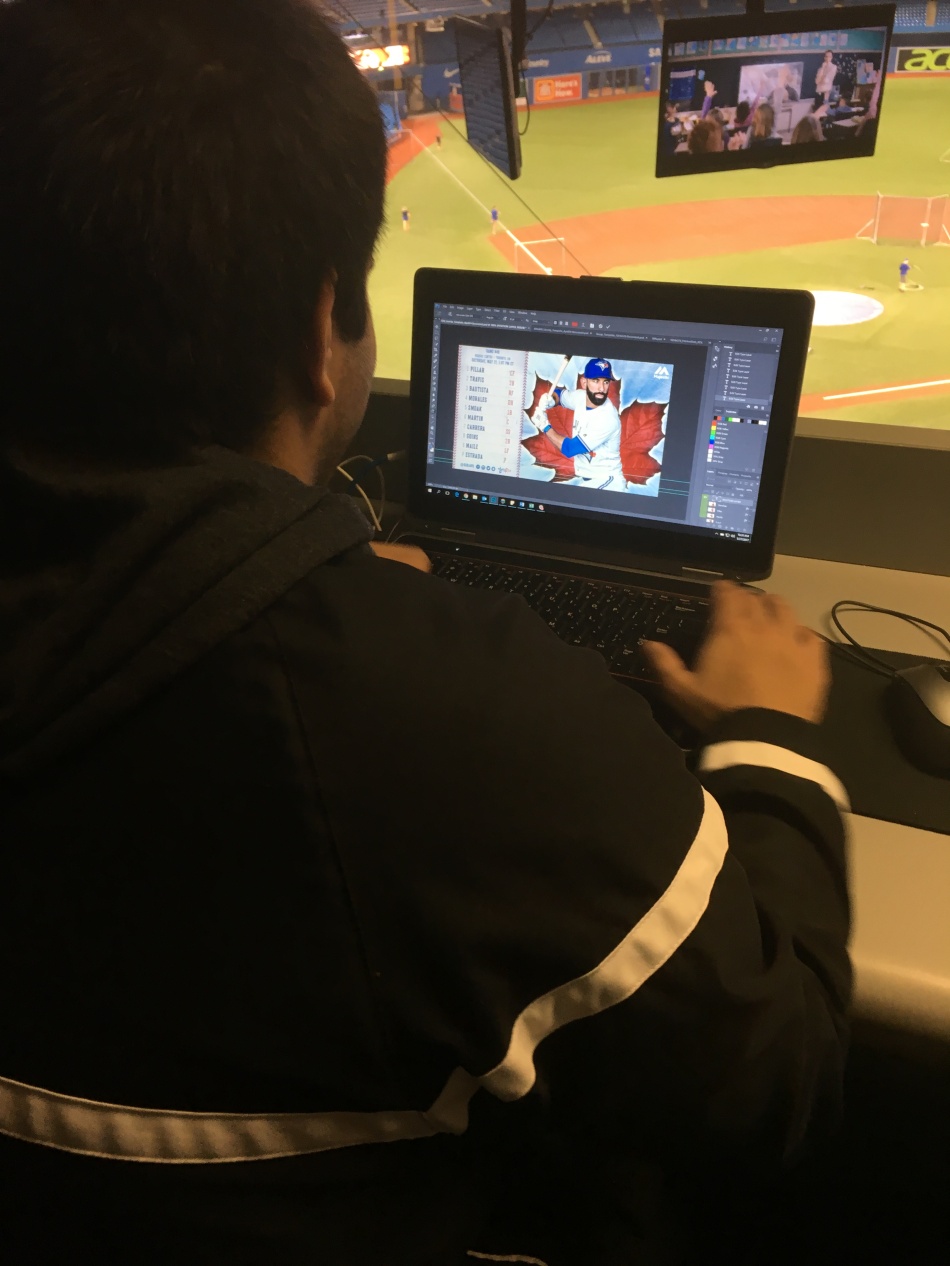 We went back to the press box, which is where April and the man she works with showed me everything that goes into running every Toronto Blue Jays social media account! For every game, it is there job to post the lineup on social media. They use a photoshop and a pre-made template to enter the names, and select a player to showcase beside it. I chose José Bautista for the May 27 game (and I made the right choice!).

Once the Blue Jays went onto the field for batting practice, we went back onto the field to capture pre-game content for the Jays social media accounts. It was unbelievable to be standing so close to our favourite players and coaches, something I had only ever dreamed of doing! Batting practice was optional for both teams, so only a handful of batters took BP (none of the Rangers batters did).

While on the field, I captured Jays manager John Gibbons being interviews by reporters and Sportsnet media. 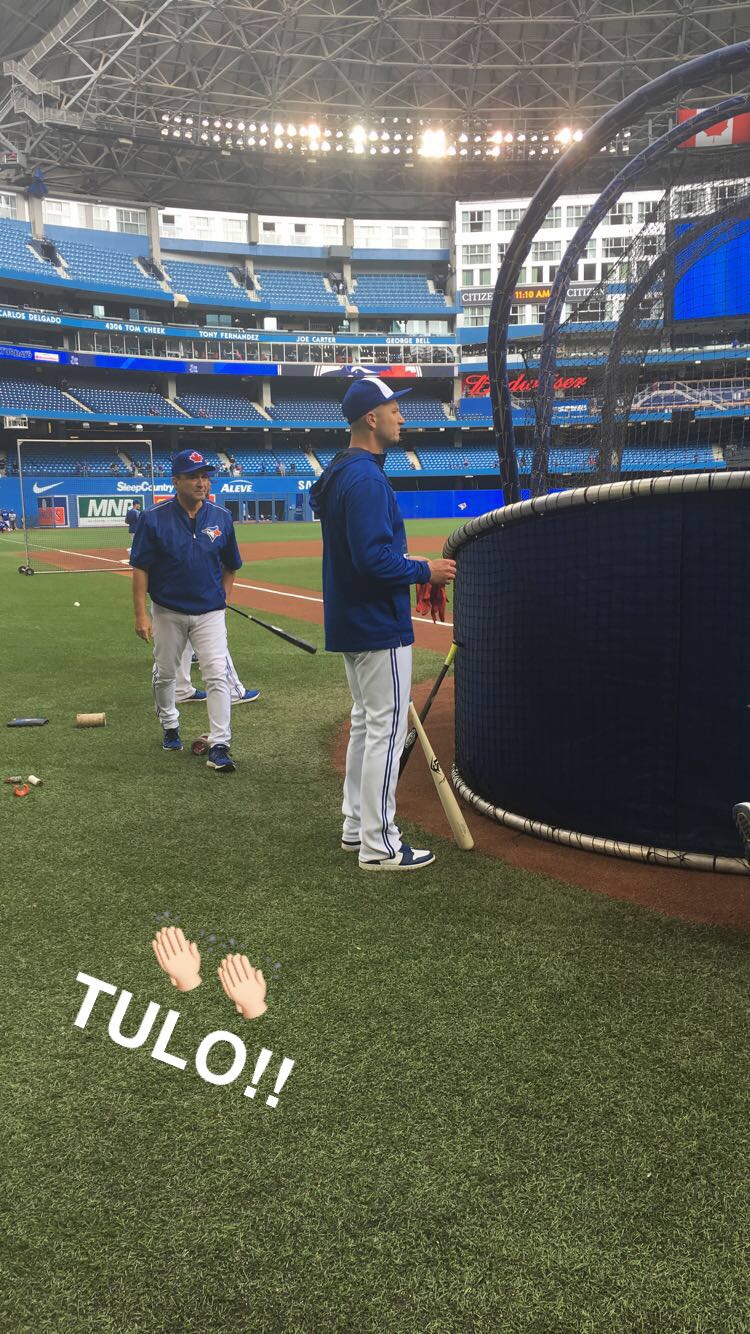 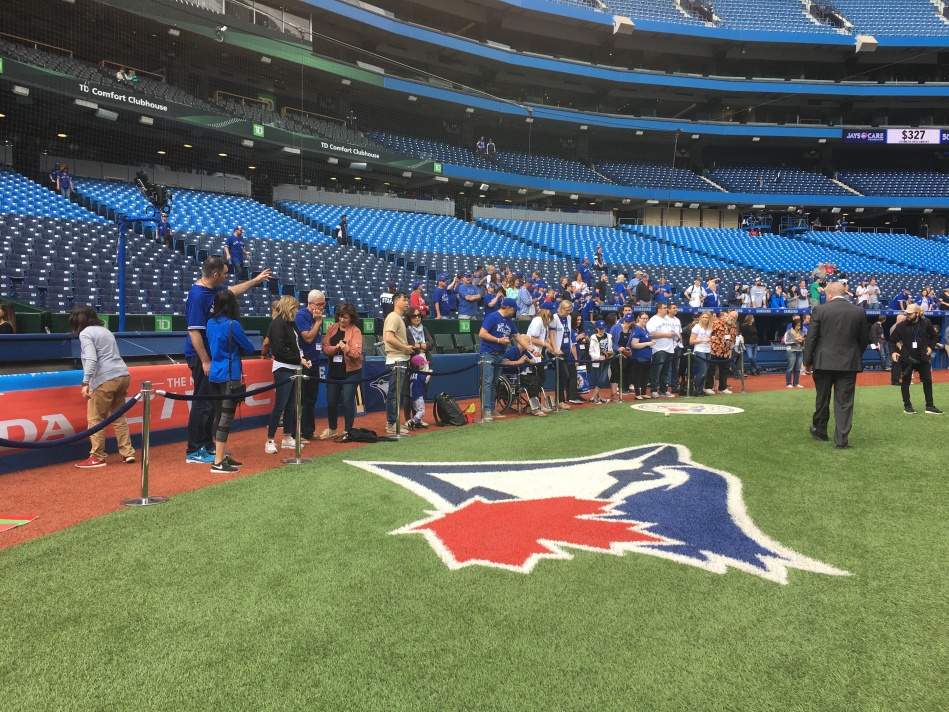 Several Blue Jays players were on the field, taking batting practice or being interviewed by players. There were also a lot of fans on the field taking pictures and getting autographs from the players.

On the field, I the chance to meet Barry Davis. He was so friendly and kind, and we chatted for a few minutes about his podcast!

At the end of batting practice, I took a few photos and said hi to many of you that were there that normally correspond with me on twitter! It was so nice to meet so many of you at the game!

I then headed all the way up to my seats to sit with my Mom and Dad! We sat all the way up in the 500 section, but I wouldn’t have had it any other way! 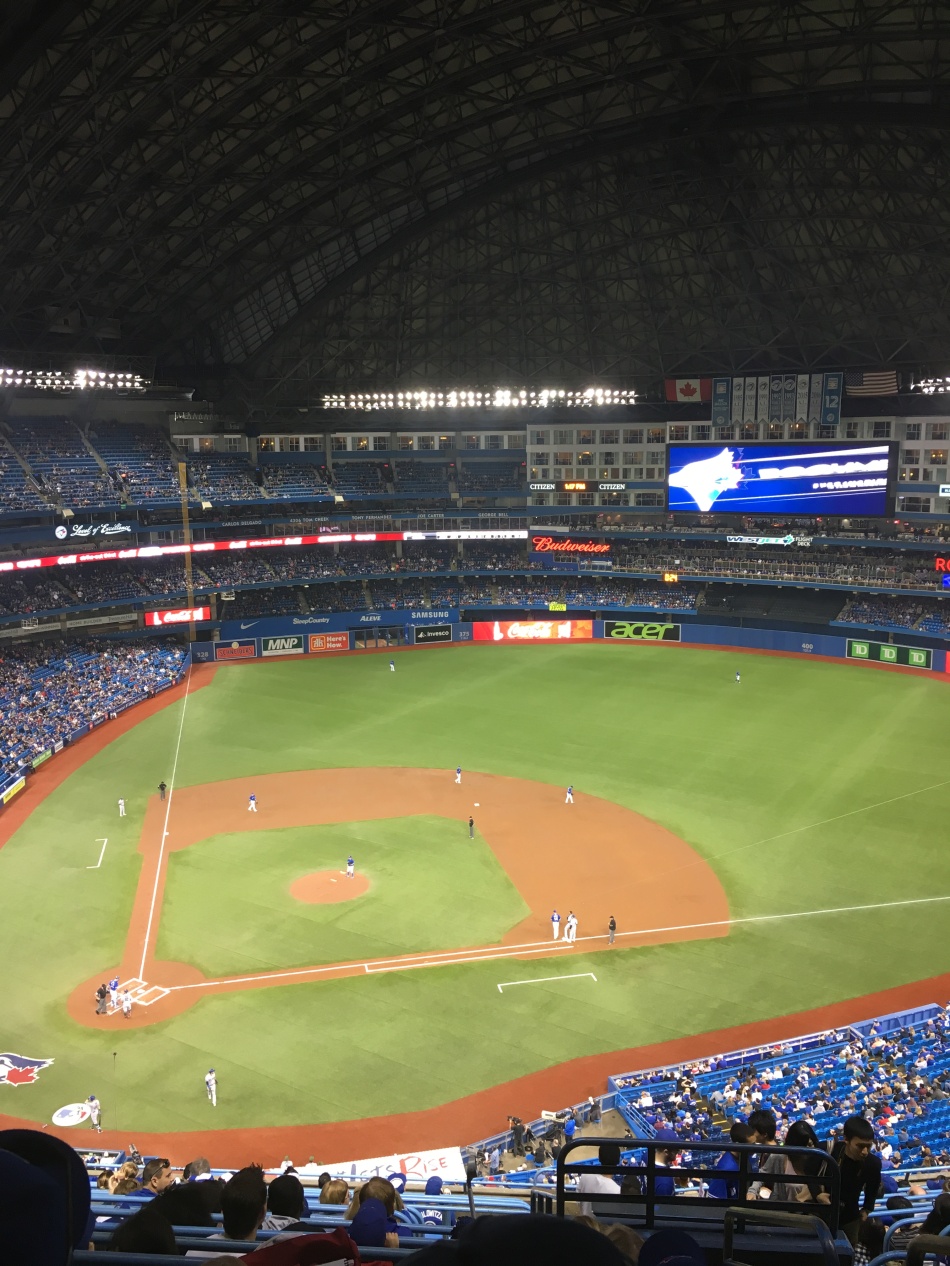 As all of you (should) know, our Blue Jays won the game 3-1, but it was quite an odd one! From multiple hit by pitches, a first pitch of the game homer, an Odor trip and fall, and (most importantly) a three run home-run by none other than “Texas Rangers Owner” José Bautista(!), it made this game much more interesting to watch live!

This game and my birthday were a huge success. If it wasn’t thanks to each and every one of you who read these blog posts and/or my tweets, this would never have happened! Thanks to my Mom, April Whitzman and the Toronto Blue Jays organization for making this happen! Thanks to all of you for your lovely birthday messages and words of encouragement, I appreciate it more than you will ever know.