“This Week in the Jays Nest” is a Toronto Blue Jays weekly recap that will be posted once a week on the Alyssa Cohen MLB Blog. It will feature the highlights of the past weeks Toronto Blue Jays baseball games, injury updates, roster updates and a question of the week.

This week felt a bit different from the past few. I feel like every week keeps getting better, and this week followed that pattern! Thanks to my cousin, I went to my first Jays game of the season on Sunday (and I got the Stroman replica jersey!). I saw Bautista’s 1000th hit as a Blue Jay, the first time this season the Jays have won a series, and the first time they’ve won back-to-back games this season!

Jesse Chavez made his first start of the season, but Chavez was no match for the Jays, giving up one run in six innings. The Angels bullpen did there best to silent the Jays bats and we lost 2-1.

This will go down as one of the best Blue Jays games played this season. Estrada was great, giving up two runs in six innings. Thanks to an acrobatic play by utility man Chris Coghlan, the Jays were up 4-2 in the seventh inning. The bats finally came alive, but Osuna blew the save, and we went into extra innings. Miraculously, RHP Marcus Stroman hit the game tying double, and he eventually came into score to get the winning run. WOW! Plus, Mark Buehrle was also at the game! And the post game comments were almost (but not nearly) as good as the game itself! This may have been the craziest Jays game since the 2015 Jays vs. Rangers ALDS. Just check out the results from a poll I ran on twitter:

#POLL: Was this the craziest #BlueJays game you've seen since #Jays vs. #Rangers 2015 ALDS?

Everything about this game was odd, but that just made it even better!

I can’t believe I’m saying this, but the Jays lost this heartbreaking game 8-4, after Osuna blew yet another save. The Cardinals hit a walk-off grand slam to win this one in extra innings, taking a win away from Mat Latos (who pitched a gem of a game).

While this game looked like a clear loss, the Jays made it interesting in the fifth inning scoring four runs, along with a Kendrys Morales home run. But, they couldn’t come back to grab the win.

The Blue Jays finally came back home to the Rogers Centre, but the bats of the Tampa Bay Rays were no match for the Jays. Stroman pitched a great game, going 7 1/3 innings, striking out 10 batters, but Jason Grilli gave up 4 runs in the eighth inning, to give the Rays a 5-3 lead. Eventually, the Jays would get a run back in the ninth, but the Rays won 7-4.

The Jays pitching looked like how it was playing last season! Fransisco Liriano earned his second win, pitching 5 innings of one run ball, and the bullpen threw four scoreless innings. Justin Smoak went 3-3 and Russel Martin had two hits including an RBI, in this Jays win!

I attended my first Jays game of the season and saw the Jays first series win, first consecutive win and José Bautista’s 1000th hit as a Blue Jay! After Aaron Sanchez left the game after throwing just one inning, Ryan Teperra and the entire Jays bullpen pitched a great game and keeping the Jays in it for the entire game. Thanks to hits from José Bautista and Russ Martin, the Jays won their second game in a row!! 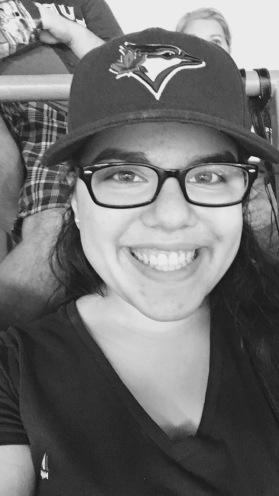 Question(s) of the Week:

I have not been around since the beginning of the Blue Jays, but in most recent seasons I would say he is definitely near the top of the list. Ryan Teperra also comes to mind, but since his fantastic outing on Sunday, I think he may have secured a spot in the bullpen. Danny Barnes has been one of more reliable pitchers in the bullpen, but since there are only 25 spots on the roster, the Jays have had to push him back down and bring him back up. Now with the 10-day DL, we will probably start to see more of him. 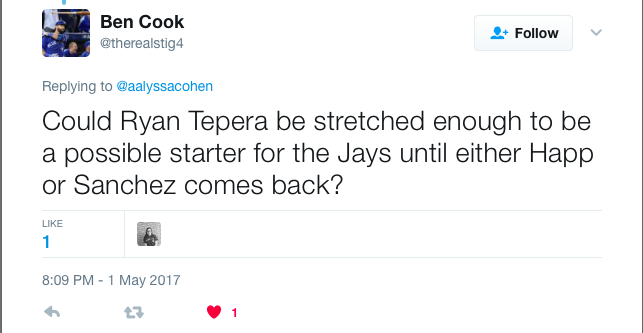 I think that Ryan Tempera definitely could be stretched out to become a starter. With the way the Jays are playing now, it could be possible for him to pitch 4-5 innings and give the rest of the game to the bullpen to finish off. Casey Lawerence may possibly be making his third start as a Jay, but I think Teperra might be a better option.

The Jays had there best week yet, with both their hitting and pitching coming back to help them win games! Hopefully the winning streak will be able to continue into this upcoming week!

0 comments on “This Week in the Jays Nest #4: Stirring Up a Comeback?”