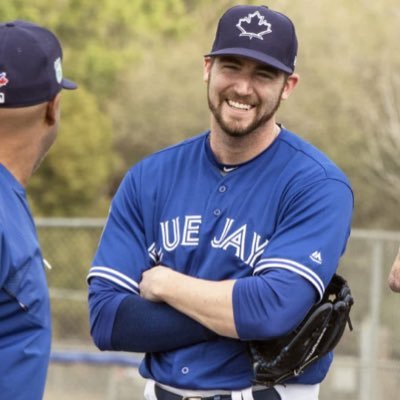 During this day and age, it is things like Twitter that can not only get us close to our family and friends, but also people that we look up to. In my case, those people consist of baseball players!

A few weeks ago I messaged Toronto Blue Jays prospect Christopher (Chris) Smith, and asked him all things Blue Jays and Baseball related.

If you are unaware with who Chris Smith is, let me refresh your memory! Christopher Smith was unchosen in the Major League draft, but was instead selected in the Independent Frontier League’s draft by the Lake Erie Crushers. He played for a handful of teams, and in 13 appearances he pitched to a 4-2 win-loss record. In 2013, Smith signed a minor league contract with the New York Yankees, but did not play that year due to a stress fracture in his forearm. In 2014, he was assigned to their Class-A affiliate, the Charleston RiverDogs. He was later promoted to the Advanced-A Tampa Yankees, and in 32 total relief appearances, posted a 1–2 record, 2.98 ERA, and 49 strikeouts in 5 1⁄3 innings. Smith began the 2015 season with Tampa, and in May earned a promotion to the Double-A Trenton Thunder. At the end of May he was sent back to Tampa, and in late July Smith was released by the Yankees organization.

Smith signed a minor league contract with the Toronto Blue Jays and played with the Advanced-A Dunedin Blue Jays and Double-A New Hampshire Fisher Cats. Smith made 31 total relief appearances in 2015, and pitched to a 4–2 record, 2.05 ERA, and 57 strikeouts in 5 2⁄3 innings. In the offseason, he played for the Gigantes de Carolina of the Liga de Béisbol Profesional Roberto Clemente. Smith was assigned to New Hampshire to open the 2016 minor league season, and earned a late-season promotion to the Triple-A Buffalo Bisons. He recorded a stellar campaign, making 47 appearances and posting a 1–3 record, 1.93 ERA, 76 strikeouts, and 15 saves in 60 2⁄3 innings.

Smith is currently thought to be fighting for a spot on the 25-man roster for our Blue Jays, as last September he was called up for the 40-man roster and is currently a permanent member of it.

I had the opportunity to interview him thanks to twitter (you can follow myself here, and him here)! Here it goes!

Who are some of your closest friends within the Blue Jays organization?

“I like to think I have all kinds of friends within the organization. I’m surrounded by nothing but good guys so it’s really tough to single out a select few. I’m pretty close with Matt Dermody, and Wil Browning and guys I played with last year throughout the minor leagues, but I’ve also learned a lot already from guys like Jason Grilli, Gavin Floyd, and Aaron Sanchez.”

How did you know you wanted to be a baseball player?

“Well I guess baseball started for me when I was about 4 years old playing tee ball. My older brother got a head start on me and I always wanted to do what he was doing so I think I started playing then and just fell in love with the game and I’ve been playing ever since.”

What is your best pitch and how did you learn to throw it?

“Best pitch or my strikeout pitch is probably my slider. Learned to throw it in college but have been refining and tuning it since then to get better. I’m also really starting to enjoy throwing my fastball. Nothing like punching a guy out with your fastball.”

After watching the Jays within the past two seasons, does that motivate you to work your hardest and try to come up to the Major League team?

“The success the team has had the last few seasons is definitely motivating. I’m just looking forward to getting the opportunity to help the team any way I can. Another playoff run and a chance to win the World Series is the ultimate goal and it would be pretty awesome to be apart of that.”

What do you think of the city of Toronto and all of the fans?

“Wow, what an incredible fan base and beautiful city. I don’t know if there’s a better place to play in all of baseball. Last year I was fortunate to have a little taste of Toronto and it was very eye opening to see how much everyone comes together there and also how amazing the city is structurally and culturally. They don’t just call us Canada’s team for no reason eh? Haha that’s the best Canadian impersonation I can give LOL!”

“And last but not least Blue Jays World Series Champs in 2017? Sure does have a nice “ring” to it. But in all seriousness like I said it’s the ultimate goal and I know this organization is all in to compete for a World Series Championship which makes it that much better to be a Blue Jay right now. It’s going to be a fun year!”

Thanks so much to Mr. Christopher Smith for doing this interview for me! I really appreciate what you do for this team, and hope to see you pitching on the mound in a Jays uniform very soon!