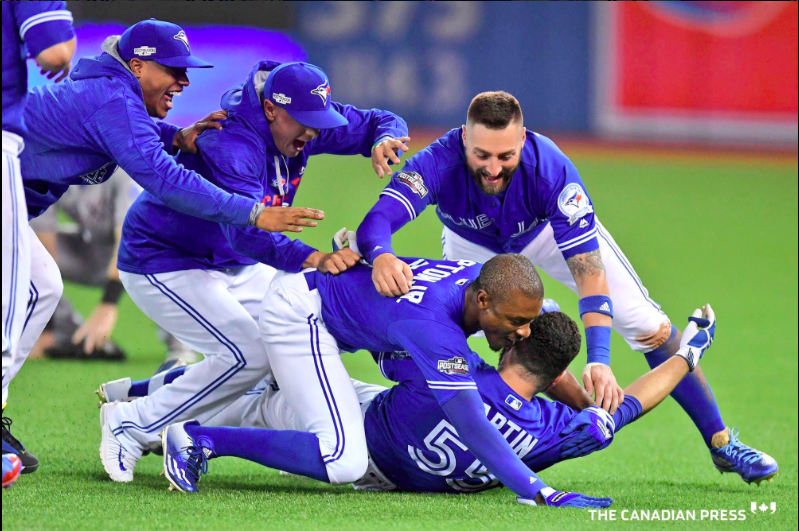 Imagine loosing to a team in the playoffs, crying about it all year long, finally getting your rematch, and then getting swept. That is exactly what happened to the Texas Rangers.

On October 9, 2016 our Toronto Blue Jays made their way back home to try and complete the sweep against the “best” team in the American League. The Texas Rangers completed the 2016 season with a record of 95-67, only second to the Chicago Cubs (103-58). Over the past two games, they had seemed to really loose their “mogo” and it definitely hurt them today.

I decided to watch the game with my Aunt, as my parents had a wedding to attend and I always prefer to watch games with someone, rather then just myself!

In the first inning, Aaron Sanchez did not look well. He didn’t seem to have much (if any) control of his ball, and it hurt us badly. Sanchez gave up a leadoff walk to Carlos Gomez, and he eventually stole second base. With a ground out from Ian Desmond, Gomez trucks over to third base. With another grounder, the Rangers strike first and score the first run of the game.

Come the bottom of the first inning, their lead didn’t last long! In true Blue Jays style, Carrera leads off the inning with a single right down the middle, and just like that the tying run is on first base! After Donaldson strikes out, Eddie brings out the Edwing with a 2-run home run! One batter later, Russel Martin comes up to bat with an 0-11 post season start. What better then a solo home run to start up Martin’s hitting streak? After the first inning, our Blue Jays lead 3-1!

To start off the top of the 3rd inning, Sanchez gives up a solo homer to inch the Rangers closer by trailing 3-2. Although, he seems to be getting more control by ending the inning with a strikeout.

Carrera starts off the bottom of the third with a leadoff single, and with a bad throw from Lucroy, Carrera steals second base! Josh Donaldson gets a great hit in fair territory and gets a ground rule double to score Carrera! After the ground rule double, Jeff Banister – the Texas Rangers Manager – takes out Lewis and brings in Tony Bornette from the bullpen to finish off the inning. Edwin hits a longgggg single and scores Donaldson! After Martin grounds out into a fielders choice and the inning ends, we lead the Rangers 5-2!

Carlos Beltran gets a leadoff walk and all of a sudden we have one on with nobody out for Odor. Two pitches later he hits a 2-run homer and just like that it’s a one run game, heading to the bottom of the fourth.

Come the top of the fifth, Sanchez strikes out all three batters of that inning (Mazara, Gomez and Desmond).

But the top of the 6th is not a nice inning for our Blue Jays! With two quick outs from Sanchez, he seems to lose control of his ball yet again. Odor walks and Lucroy singles. Gibby takes the ball out of Sanchez and into Biagini’s hands to end the inning. Although Sanchez was out, the two base runners are his responsibility. A deep single from Moreland (and a JUST missed catch from Kevin Superman Pillar) gives the Rangers the lead for the first time ever this series. Finally we get out of the inning but we trail 6-5.

Heading to the top of the 6th, trailing 6-5 and we know something has to happen! Tulowitzki hits a deep single into LF and just like that, the tying run is on first base. Banister decided to take out the current pitcher and bring Diekman into the game. The next batter he faces is Melvin Upton Jr. who has been quite good during the post season! To justify my point, Upton shoots a double to RF, and Tulo stops at third base. Pillar walks with 2 on one out (this is because there was no one on first base, and if there was they could have gotten a double play to end the inning, as there was already one out) for Darwin Barney. Barney pops up right next to third base, not advancing any runners. On the next pitch, there is a passed ball issued and TULO SCORES! We are tied! Carrera then hits a deep fly ball to RF, but sadly Mazara catches it to end the inning.

Let’s ZOOM to the top of the 10th inning, that’s right folks, we are in extra innings!! Donaldson starts off the inning with a leadoff double, and the fans get hyped up! The Rangers intentionally walk Encarnacion (which they must have learned from the Orioles mistake). On a 3-2 count Bautista strikes out, quite the mood killer! Now comes the most exciting play of the series. Martin hits a ground ball to shortstop, setting up what looks like a double play. They get the first (and only) out at second base, and with the ball in his hand Odor throws to first and Moreland NEVER CATCHES THE BALL!! And what does the MVP to about it, well he runs to home… AND HE SCORES!! WE WIN THE GAME!! As I was celebrating, half screaming half crying with my aunt, Banister reviews the play at second to look for any interference. If the call was overturned and interference was called, it would have been an automatic double play and we would’ve been headed to the 11th inning. Thank goodness the call was upheld, the runner scored and WE OFFICIALLY SWEPT THE TEXAS RANGERS!!!

If you want to recap on the entire series, read my ALDS Game One recap and Game Two recap!

Everyone on twitter (was of course) going nuts! Here are some of my favourites:

Too bad Odor can't throw like he can punch.

And now we are headed to the ALCS! The Indians completed the sweep of the Red Sox last night, and we will be headed to Cleveland on Thursday, to start the series on Friday. Click here for the ALCS schedule.

The Blue Jays are the favourites to win the ALCS because of all of the momentum that we have had so far in October! We have seven out of the nine frequent starters that have at least one home run in the playoffs this year. Some even have 3 in the past 4 playoff games… *cough* EDWIN *cough*!

I am very excited for the ALCS to begin, remember we only have four more wins until the World Series!