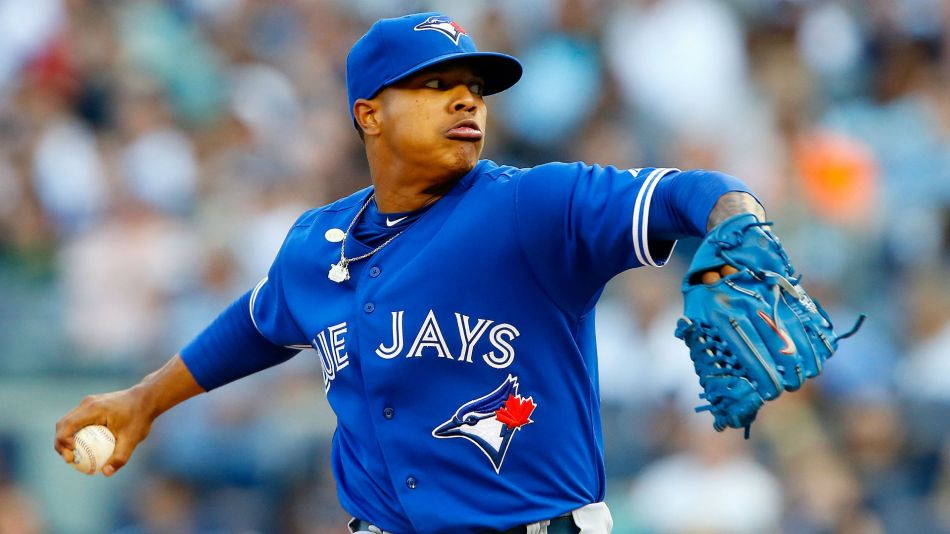 With Marcus Stroman on a little bit of a downfall, where will his fate lead him?

Last year, Marcus Stroman could be considered one of the many saviours of the 2015 Blue Jays team. And although he may not have necessarily helped them to get to the playoffs, he helped them in the playoffs (which I consider more important). He was 5-0 last season, and had a great start to the season. The last thing I would’ve expected is for him to get to where he is now. Sure, he’s short and does not have much MLB experience, but he was considered their Ace in early April.

Now, he’s 6-4 with a 5.33 ERA (highest starting pitcher ERA on our current team). Not terrible, but not like Marcus Stroman. You can visit his Twitter everyday and see some sort of motivation. You can tell he wants to get back to how he was originally, but theres something he just can’t do. And to be honest, I can’t really pin point it exactly. Maybe it’s just a combination of things.

But when a team like the BlueJays a possible playoff contender has a pitcher like Stroman, it’s not easy to know his fate. Every win and every loss counts, even when Stroman is pitching. A few days ago I saw a tweet that said their gonna give him 10 days (2 starts give or take), but that may not be the best thing to do.

I have come up with a list of a few possible outcomes, but remember this is only my opinion. Trust me I’m not always right!

I’m not ready to send Stroman down (even though both Gregg Zaun and my Father are). So why not have a reliable pitcher in the bullpen. He can go in for at least 2 innings, possibly 3. This way, he could make his way up to go back in the starting rotation. And if for whatever reason Gibby decides to put Sanchez in the bullpen as well, we will have a VERY reliable bullpen. The only thing that could ruin this theory is that the players in the bullpen now will not have as many innings on them if everything stayed the same as it is now. And when the Blue Jays make it to the postseason, they may want both Sanchez and Stroman back in the rotation. In which case the regular bullpen may not be as prepared as possible.

Now here’s the thing… You either love this theory or hate it. Personally, I don’t like it. I think that he’s better than being sent to Buffalo. Honestly though, you never know. See, Stroman could focus on his pitching rather than the fact that he has a big pressure to win, which could be very rewarding in the end. On the other hand, Stroman could feel like he is being slightly disrespected. As I was writing that, I knew exactly what Billy Beane would say. By going to the minors, he could give Bisons ace Drew Hutchison (who really deserves a spot on this team) a chance to come up to the majors and start.

As many would say, “Practice makes perfect.” And maybe for Marcus Stroman, that’s all he needs. Sure, he’s had a lot of practice but he’s had a rough past year. I think that this method is VERY risky, and it could lead one of two ways. Either him staying the way he is, or getting better.

What do you think Marcus Stroman and the Blue Jays Organization should do? Let me know in the comments.

I hope you enjoyed this evening Thursday read!

0 comments on “Marcus Stroman and his (many) Fates.”